I looked up from the work I was doing on my computer and he said to me, “Te lo prometo que no es para drogas.” It’s not for drugs, he said, the money he’s asking for.

I told him no, that I didn’t want to buy his trinkets or give him money. He asked again and I said it more firmly and averted my eyes from the pair of eyes staring back at me; turned away from the human being standing before me.

Steeling myself to stare at my computer until he went away, in the same instant something inside of me turned toward him to ask if I could buy him a cup of coffee. The words just came out of me. Un café solo is what he wanted and I hopped out of my chair to order it. Of course I would buy him a coffee. Why wouldn’t I?

Why didn’t I give him money? Several reasons (were they reasons or excuses or some of both?) ran through my head. 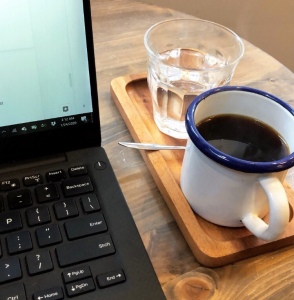 That night at Bible study we read Proverbs 3 and my heart listened: “Do not withhold good from those to whom it is due, when it is in your power to act.”

I know all the reasons not to give money to panhandlers and beggars. I know them from a social work perspective as well. And they’re not necessarily incorrect. But still, God prompted me to check my heart.

Whether it’s a cup of coffee or cash, do I need to be a bit more reckless with giving my money when people ask me for it?

Throw it around more freely as if I don’t depend on it (I don’t).. as if I’m not the judge of what people do with it (I’m not).. as if it’s not mine in the end (it’s not).. and as if the other humans in front of me are as important, or more important, than me (they are).